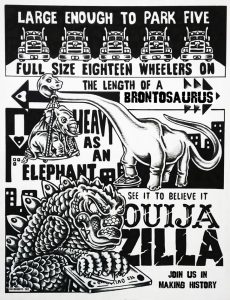 What’s heavier than an elephant, longer than a brontosaurus, and large enough to park five, full-size eighteen-wheelers on? The World’s Largest Ouija Board, or as we like to call him, OUIJAZILLA! Stay tuned for lots more information about this record-breaking labor of love, more than a year in the making, created by our very own TBHS Vice President, Rick “Ormortis” Schreck!

The Talking Board Historical Society, a non-profit group dedicated to researching, preserving and celebrating the history of talking boards, announces the unveiling of the World’s Largest Ouija Board, aptly named Ouijazilla.

On October 12, 2019, Rick “Ormortis” Schreck, vice president and director for the Talking Board Historical Society, unleashed the beast, crushing the current Guinness world record set on October 28, 2016 by almost two-and-a-half times the size. To put this in perspective, because “size matters”, the finished board is as longer than a brontosaurus, weighs more than a six-ton elephant, and is large enough to park five eighteen-wheelers on it! 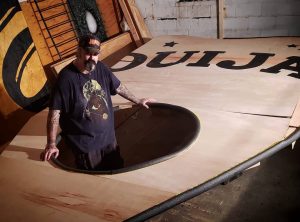 In the classic style of the original Ouija board, first patented in 1890, Ouijazilla is fully operational, 100% constructed of wood and hand-painted by renowned New Jersey tattoo-artist Rick Schreck.

Possessed by the spirit of the project, Schreck has invested hundreds of hours over the past year, enlisting the help of his family, the Haus of Schreck, to finally realize his dream.

The Talking Board Historical Society welcomed Ouija home with an event in the Salem Common area of the historic Witch City, Salem, Mass., home of the Ouija board from 1966-1991. The public celebration took place on Saturday, October 12, 2019 at 1:00 p.m in the Salem Common, N Washington Square, Salem MA 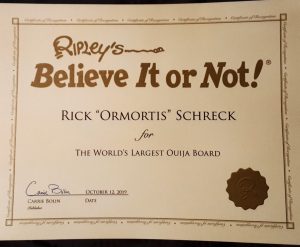 UPDATE: It’s official! Ouijazilla has been inducted into Ripley’s Believe It or Not! as the world’s largest Ouija board! You can see more photos of the board and the event on the Ripley’s page dedicated to Ouijazilla, UNLEASHING OUIJAZILLA: THE WORLD’S LARGEST OUIJA BOARD, 9,000 POUNDS OF SPOOKY IN SALEM!